The 6 Best iPad Flight Simulators Worth Paying For

I love playing simulator games on my iPad.  Even though I have numerous games I already like, I’m always trying new ones just for a different experience.  I’ve downloaded most of the realistic simulators from the app store and these are the 6 best simulator games worth paying for.  Rortos Flight Engine has a lot of my favorites.  This is NOT a sponsored post and I’m not getting commission from these links.

This is my favorite.  There are so many options from airplanes, decals on the airplanes, airports, etc.  There are small planes, massive planes, jets, and everything in between.  The graphics are very realistic.  You can turn off your lights, and make the cabin bells ding for your virtual passengers to wear their seat belts.  You can mark one or many airport destinations to create a flight path.  One of the best features is replay.  At any time you can replay what you’ve done and switch to different views.  It’s fun when I make a great landing to review it at other angles…or when I fly a jet and I fly upside down past air traffic control, it’s fun to see what it looked like in the tower.  Infinite Flight has a community where you can fly with others.  I haven’t done that yet, but it seems really fun.  The only thing that this simulator doesn’t have that I’ve seen in a lot of others is active gauges.  The graphics are very realistic and the shading is great, but when you’re in the cockpit, the gauges are static. 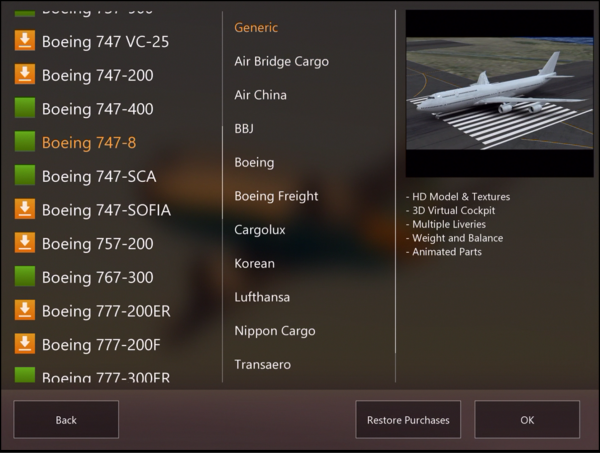 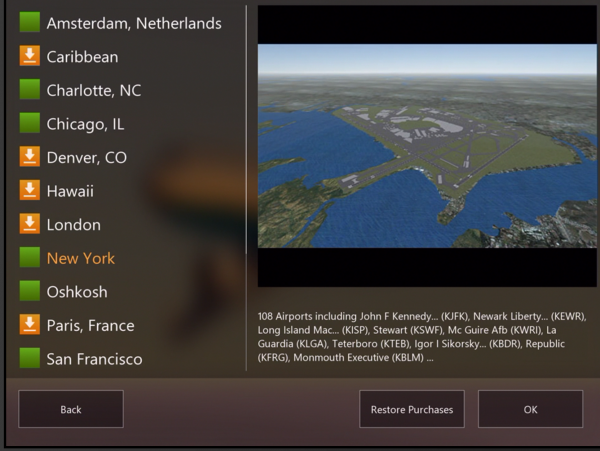 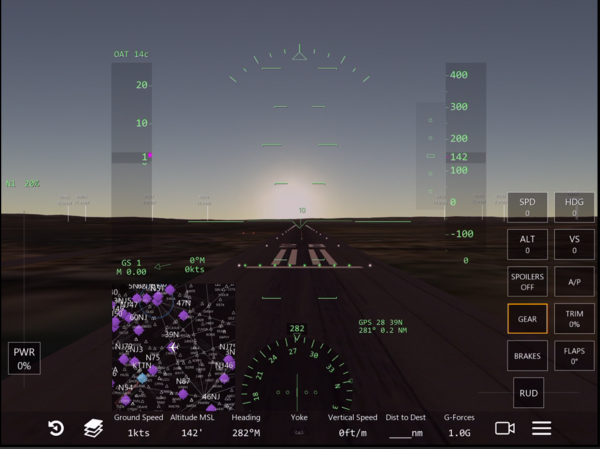 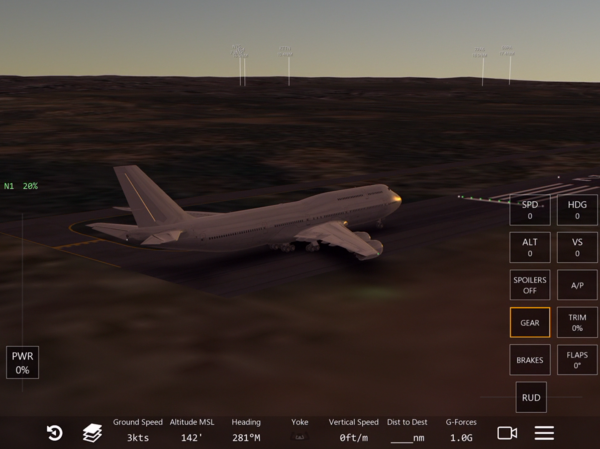 I’ve flown both a helicopter and airplane in real life, and both are fun, but helicopters are just so cool, you could say I’m obsessed.  It’s so neat how they can hover.  This game is really cool.  You can do free flight or missions, and there are a good amount of helicopters to fly.  Shooting the guns and rockets are fun, whether you’re on a mission or free flying, blowing up cars and houses. 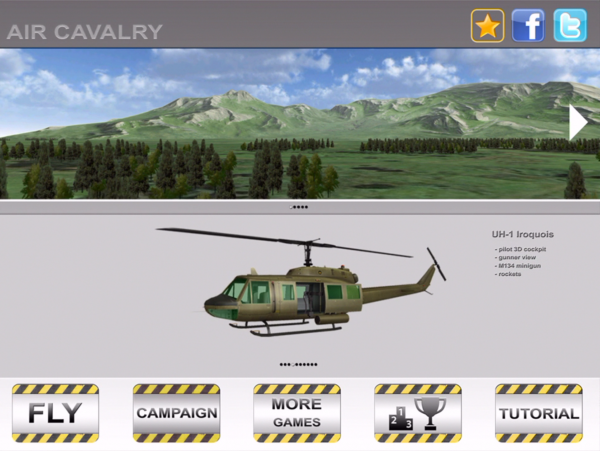 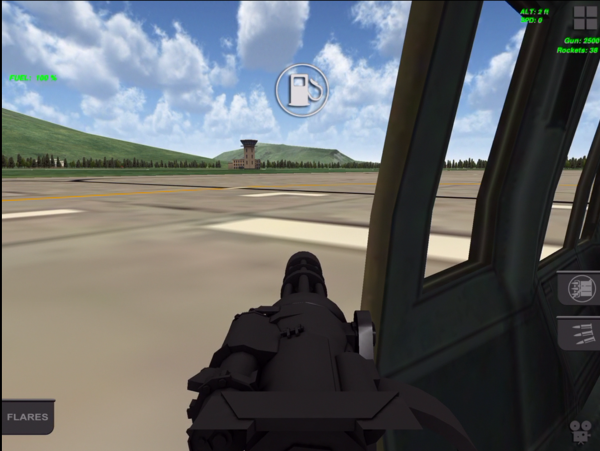 I’ve had a lot of fun with this game, and what sets this simulator out from the others is the unique inside camera views – it’s neat.  The is a good range of airplanes to fly, from prop planes, to an A380 double decker, a jet, and even a glider.  It’s very similar to their older game, aerofly FS. 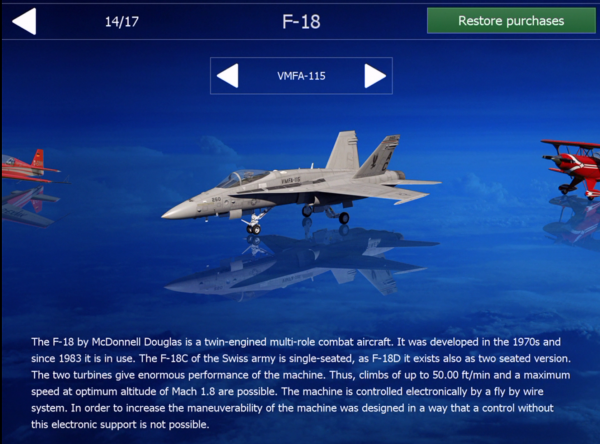 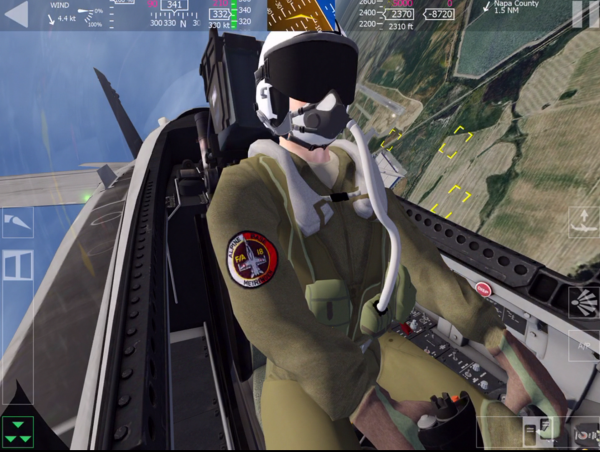 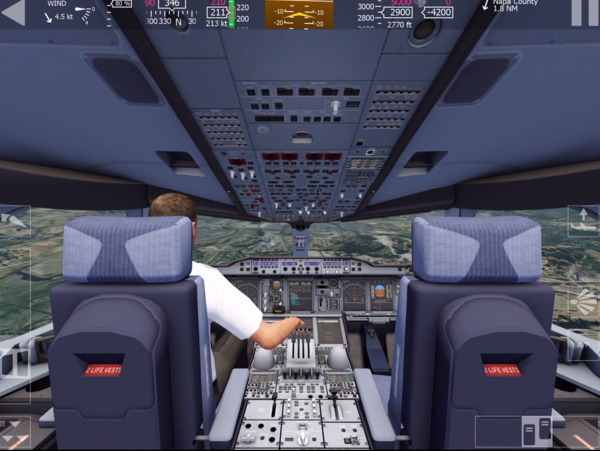 This game has both free flight and missions.  This game is a newer version of a few other similar games Rortos has.  This version incorporates a feature that Extreme Landings has as well, an option to select real world airports from a map and you can fly to your destination in free flight mode. 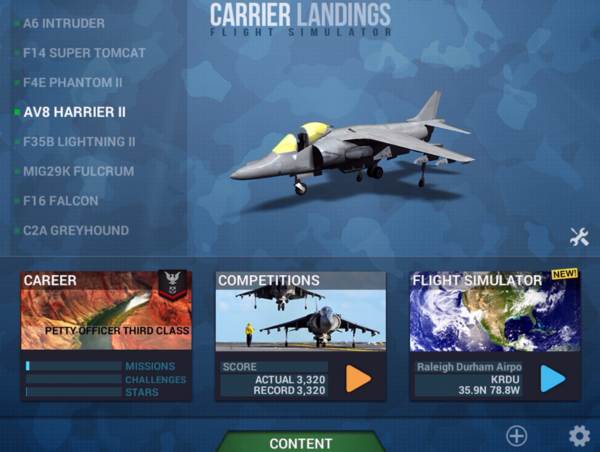 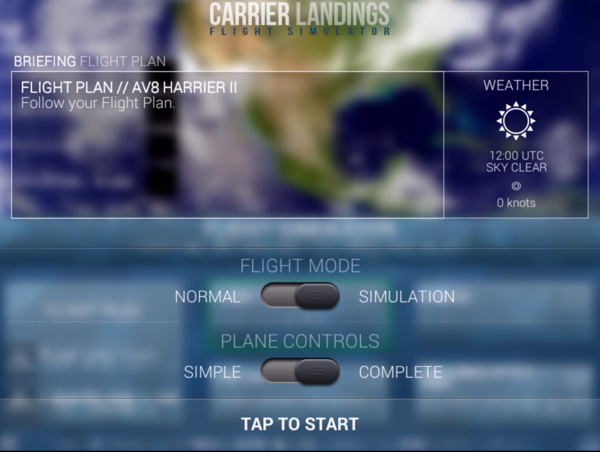 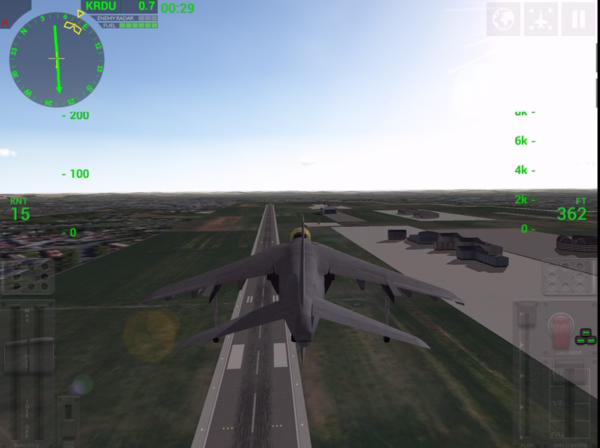 Similar to the Air Cavalry, I think this might be an older version.  There are less places to fly and only one helicopter, but the missions are different and fun to play. 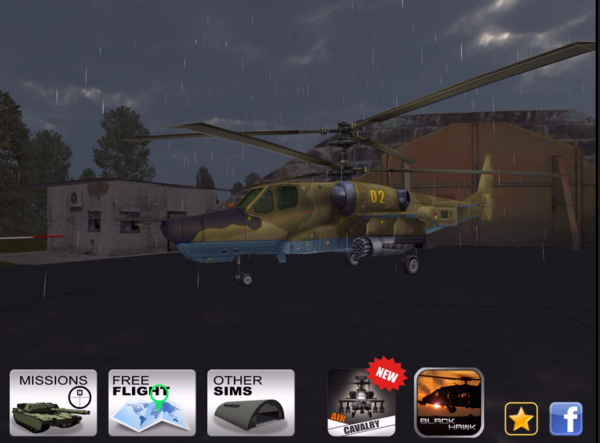 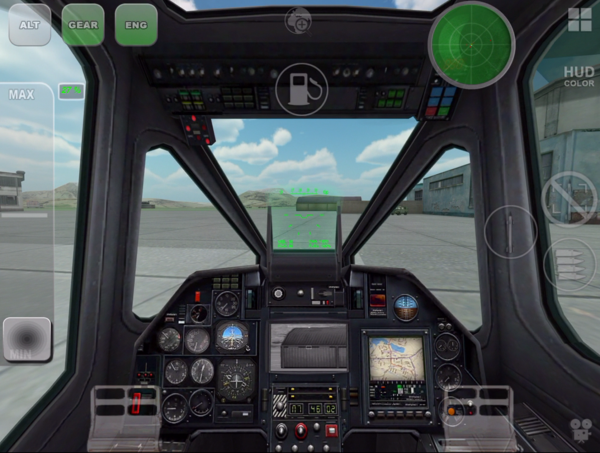 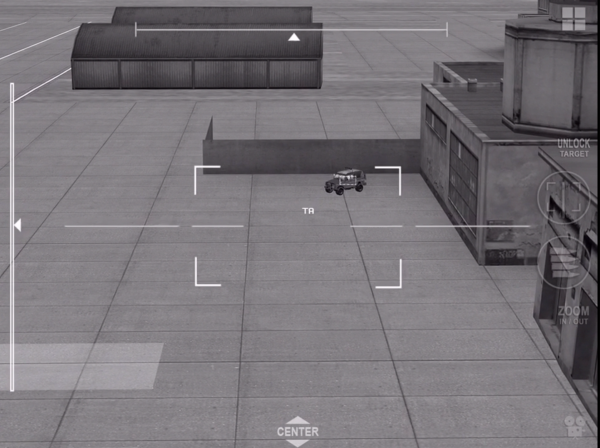 This game is unique in that as you’re flying things go faulty on purpose and the objective of the game is to make a safe landing even though there can be multiple elements of the plane that break.  It has some unique details like having to jettison fuel.  My only complaint is you have to make a good landing or the plane blows up, it really becomes annoying in free flight mode.  I wish it would just be a hard landing instead of a complete explosion.  In free flight mode you can select airports from a map, like Carrier Landings.  There are less planes to fly, but some different ones from other simulators, like the Concord, or faux Condord.  And you can elect for things to go wrong when you’re free flying as well, which can be a fun challenge. 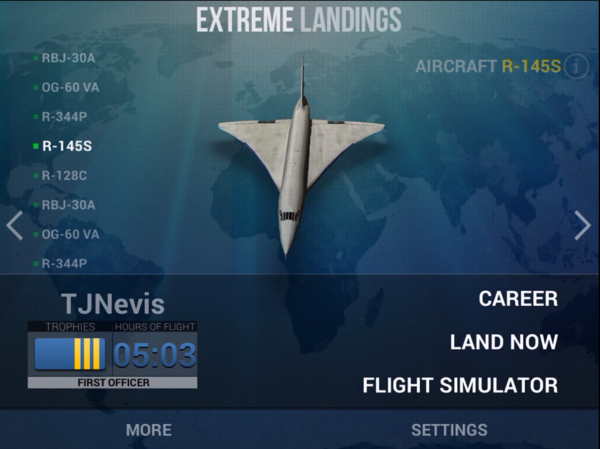 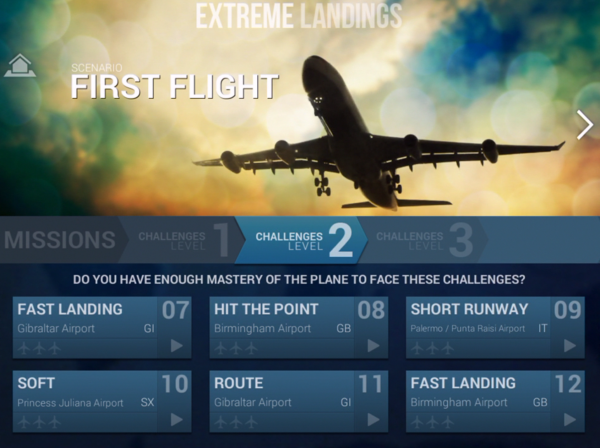 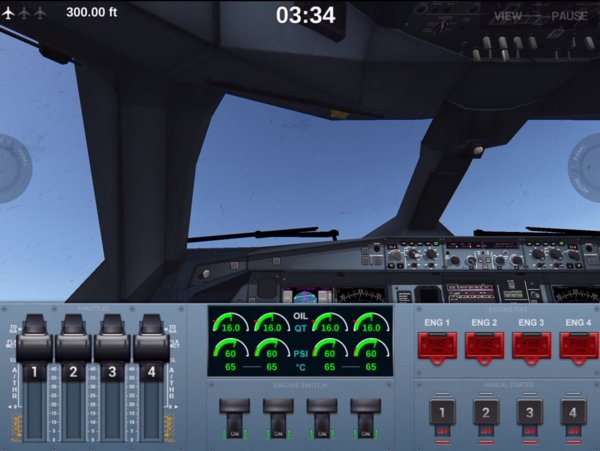 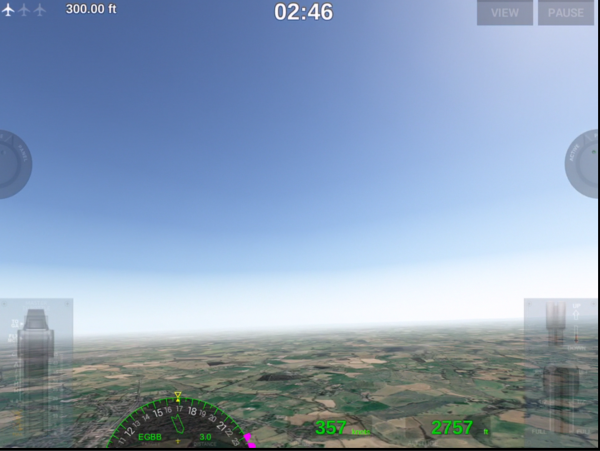 Simply named, and by Rortos.  Their games are fun and realistic with nice graphics.  With this game, you can either pay the $5 for the pro version, or you can get the free version and the ads will disappear with the first upgrade from an in-app purchase – like their other games.  This game isn’t in the bonus section because it’s a runner up or only kind of fun.  I found this after I made this post, but definitely worth getting.

I didn’t put this in my main list because of a restoring purchase issue I have with it.  I paid for the helicopter in the game, but after an update, it’s making me pay for it again to use it.  I do think this game is cool and it’s the only one I know of that has both airplanes and helicopters.  The controls can be sensitive, but it is overall a fun game.  I’ve got X-Plane 9 as well, but if you care for graphics, don’t bother with version 9.  It’s fun, but the graphics are pretty outdated.